What I say to that: Good.

Because that’s not what I use Facebook for anyway.

True story: My business partner and I were waiting to be seated at Hof’s Hut, when she looked over and jokingly said, “I can’t believe how much you’re on Facebook…”

An older gentleman, who was also waiting to be seated, heard what she said and looked up from his newspaper and smiled at the both of us, then looked at the smartphone in my hand, with my thumb in scrolling position.

I turned the phone around to show them what I was looking at, which was basically my newsfeed from Facebook: 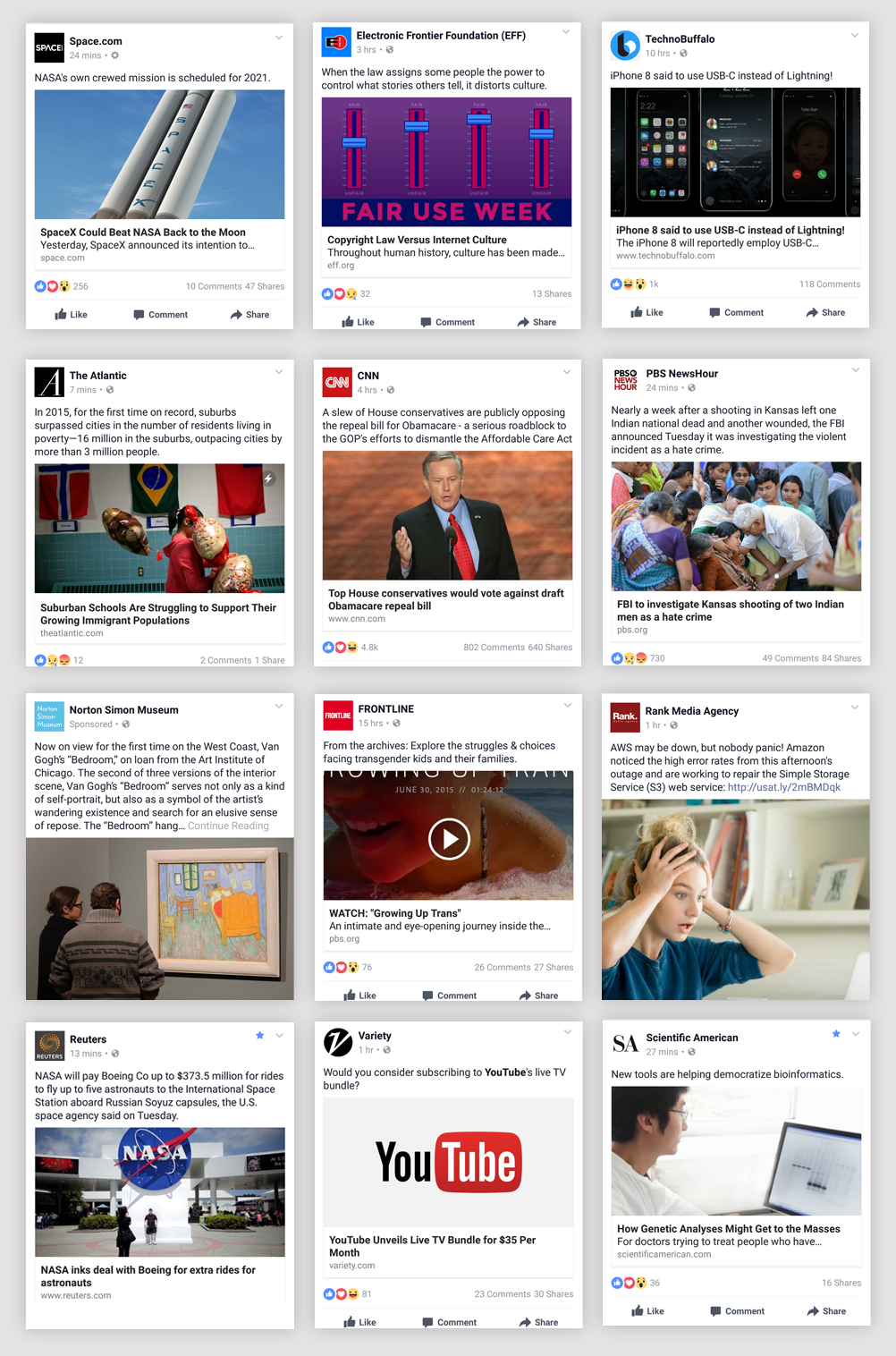 Facebook, at least to me, is INFORMATION. It is an endless newsfeed of everything that you want to know, about topics that you care about that will increase your knowledge in business, in life, in productivity. Because of Facebook, I know how the stock market is doing and WHY it’s reacting that way. I can check the local news as well as what’s going on in the nation, and not just in a general way but much more specific, more targeted–many times a news entity will have a subdivision, and that subdivision will have its own Facebook newsfeed. Huffington Post Finance is very different from Huffington Post Food, is very different from Huffington Post Technology.

Facebook isn’t just a newsfeed, it’s also an event organizer. The New York Times FB page includes an Events section that lists local conferences, concerts, art installations, and other social gatherings. Within each listing is a calendar and RSVP feature that you can tick off so Facebook reminds you when it’s about to happen. It has a map of the venue that clicks to your phone’s Google Maps or Waze app to help you get there. If attendees take photos and tag them during the event, those photos are linked to that event’s page, so you can see it from other people’s points of view.

Facebook isn’t just a bunch of selfies, it’s also your online portfolio. If you’re an artist or designer, you owe it to yourself to have a Facebook page that features photos of your work. Your fans and customers can comment on your creations, can buy your products directly from Facebook (YES, Facebook has a store!), can ask you questions directly as well as engage others in conversation about your work, and when you have an exhibit, you can invite all your Facebook fans to that event with one posting, AND keep track of who wants to go!

Facebook fan pages isn’t just for celebrities, it’s also for people that aspire to be like one. You can easily do a Live Video with your smartphone (at least the relatively new ones can do it), and anyone can snoop in on your business meeting, or while you’re making linguini with clam sauce in the kitchen, or doing a reaction video that supplements your monetized vlog on YouTube.

So for anyone in business, YES, Facebook is absolutely useful, you just have to tweak the settings accordingly. To begin, you can use Facebook to read industry news and check the weather to prepare you for the long drive/flight to your business meeting. You can organize your colleagues with one notification of that event, with time, place and map, within Facebook Events. You can message your business connections through FB Messaging, AND send them Word files, Excel files, and other presentation files directly through Facebook. (Note that some mobile devices require that you download a separate FB Message app to handle the messaging, but it’s directly linked to your Facebook app, so the experience is basically seamless.)

The bottom line is you can plan, organize, conduct, and chronicle a whole day using just Facebook.

So don’t be too upset when your kids make fun of you for being on Facebook. While they’re taking selfies and posting on Instagram, or gossiping about Taylor Swift on Snapchat, you’re on that old fuddy-duddy of an app, and you’re getting down to business.